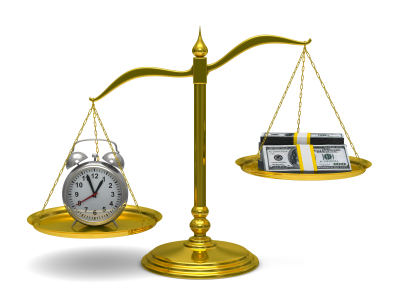 Intellectual property value changes over time. In the beginning, it has little value. It starts as an idea scribbled on the back of a napkin. As time goes on, it gains in value as it moves into the marketplace.

Different types of intellectual property change value for a variety of reasons. A patent offers a valuable solution to a market problem, but as new technologies offering better solutions enter the market, its value is reduced. Successfully launching a patented product into the market increases its value. Brands gain value as they become better known.

Development also plays a big part in both the value of your IP and the licensing deal. The closer your IP is to market ready, the higher its value and the royalty rate to license it. A 1999 member survey on royalties by the Licensing Executives Society found the stage of development does significantly impact the IP value and royalty rate. Respondents reported discounting the royalty rate 50% for an IP still in the R&D phase, meaning if a market ready IP is worth a 10% royalty, an IP at this phase is only worth 5%. The discount decreased to 35% for an IP in the design phase, and 20% for an IP in the pilot or prototype stage.

Another way of looking at it is as the risk decreases, licensees are willing to pay more for the IP rights. Another survey in 2001 by Medius Associates Limited, determined that “industry average” royalties for drugs ranged 0-5% in the pre-clinical stage, 5-10% in Phase I, and 20%+ for products in the marketplace. A new drug can increase its licensing value by as much as 20% or more as it completes each stage of its clinical trials. This translate into potentially tens of millions of dollars of additional royalty revenues by licensing at the later stages of development.

The trick is figuring out the royalty rate, which can be done several ways. Industry “norms” or comparable royalty rates are based on information compiled from different sources for specific industries, such as aerospace (2% – 15%), Medical Devices (3% – 10%) and entertainment (6% – 15%). A second option is the 25% rule, which is calculated as 25% of the operating profit (e.g., if operating profit is 10%, the royalty rate would be 2.5%). A third option is using one or more IP valuation models – cost, market or income – to determine the royalty rate.

These formulas and rules only give a starting point. There’s a wide range of other factors impacting the value of a licensing deal including the type of IP, exclusivity, performance milestones, market potential, sales cycle, competition, and many other variables.

READ   4 Ways to Get the Biggest ROI on Your IP

Keep in mind royalty rates are a reflection of value. It’s the price a licensing partner is willing to pay because of the financial return it offers them. The best time to license your IP is after completing development and some testing to prove the market viability. As it moves along the development curve, adjust your licensing activities and negotiating points. If the technology is ready to go, their incentive to license it is lower risk and a faster return than trying to build it from scratch.

Of course, in licensing, a big part of licensing deal value is negotiation. It often comes down to what someone is willing to pay for the rights to license your IP.