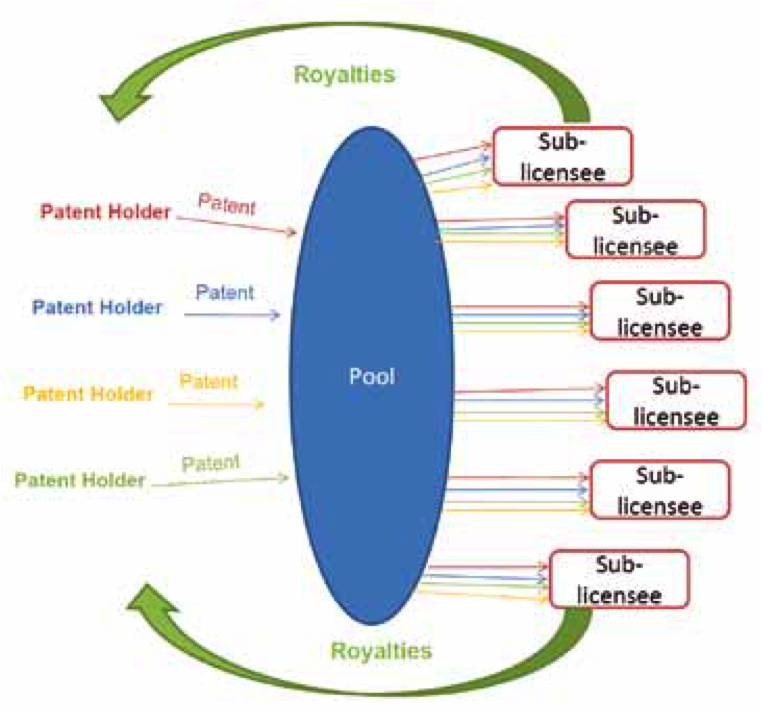 Sometimes pooling your IP with others can be a better way to make money with it. Especially if it creates a billion dollar industry.

Some of the biggest corporations in the world use patent pools to license their IP. It’s basically a joint venture strategy. The purpose of the patent pool is to make it easier and more efficient to license the intellectual property and to decrease the time and legal issues related to licensing the patents.

Patent pools have been around for a long time. They were created as a result of several inventors creating similar patents that overlapped and were significant to an industry. Rather than suing each other for infringement, these IP owners pooled their IP, and cross-licensed rights to use each others IP to make and sell their products.

One of the earliest dates back to the 1850s. Four companies came together and formed a patent pool for sewing machines. In the early 1900s the two big plane companies, Wright and Curtis, formed a patent pool so they could produce airplanes during World War I when the US desperately need these planes. In 1916 a patent pool was formed to share IP related to manufacturing beds. It included three different companies and over 20 patents.

Industry standardizing technology is another reason companies pool patents, especially in industries where there is a lot of overlapping technology. Some examples include radios, movie projectors, Wi-Fi, Bluetooth, DVD’s and cell phones. These companies agree to allow the broad licensing of their intellectual property for a reasonable rate. This makes it easier to license out the technology and it’s less work for the IP owners. Although each member receives less revenue per unit, their technology is more widely used. The industry standards technology ensures that products from a variety of licensees can communicate. In essence, they create a bigger pie for their IP.

One of the biggest patent pools is the MPEG standard. It was formed in 1997, and includes over 600 worldwide patents. It licenses manufacturers of videos, recorders anything that uses video. The pool receives about $2.50 per unit sold, and generates an estimated 1 billion plus dollars in annual royalties.

Patent pools, however, are controversial. The issue is whether they promote or restrict the use of IP, or are overly aggressive in their licensing terms. (i.e. not “fair and reasonable”).

Just recently a new patent pool was announced around patents for a new industry standard High Video Encoding Technology. This technology impacts just about all content owners and consumer electronics manufacturers. The issue with this patent pool is the unfair (and unreasonable) royalty payment terms, that have no cap and are retroactive on all previous content sold using the technology. Compare this to MPEG, which charges royalties only on hardware (not content), and caps royalties at a certain amount.

But for many industries patent pools have proved to be a great licensing strategy.

If your patent is a new technology that’s core or “essential” to certain products or technology it might be a suitable candidate for a patent pool. For example, design patents for the slide to unlock features on smart phones are essential patents. While a company could design their own slide to unlock, it was more efficient to combine the patents into a pool and allow other manufactures to get easy access to it.

The key to a successful patent pool is finding other IP owners with technologies that can be pooled together. If your IP is an industry that goes up against a lot of big competitors, patent pools can be an effective licensing strategy. You get the benefits of commercializing your IP, lowering your litigation risk and combining IPs to create a bigger revenue pie.